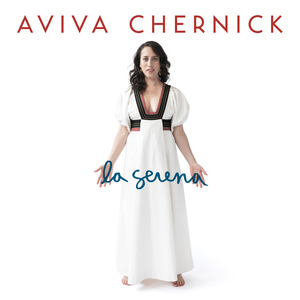 Those who have experienced Aviva Chernick’s intoxicatingly soulful vocals never forget where they heard them first. Whether in her original devotional songs, as the lead singer with Jaffa Road, or singing the Balkan Judeo-Spanish repertoire, Aviva’s passionate vocals (in Hebrew, Ladino, English and French) blur the lines between sacred and ...
secular, asking, isn’t it all holy?

On September 16th, 2019, Aviva Chernick will release "La Serena" - a collection of tunes primarily from the Jewish people of Spain and the Balkans, traditional and original melodies with rich poetry in Judeo‑Spanish (also known as Ladino). This album expands on the limited notion of La Serena (the Siren) as a female creature whose voice is intended solely for seduction and destruction. The voice and the music are lush, bold and joyous.

Aviva Chernick was looking for a blessing, a biracha for the candles, when she stumbled upon the songs of Sephardic Jewish musician and recognized National Treasure Flory Jagoda. Then lead vocalist for the popular Toronto-based world music band Jaffa Road, Aviva had been raised Ashkenazi and the foreign, yet familiar cadences of Flory’s Balkan Ladino tradition immediately entranced her. The two eventually met when Aviva asked to study under the elder musician, and the deep friendship...

Aviva Chernick was looking for a blessing, a biracha for the candles, when she stumbled upon the songs of Sephardic Jewish musician and recognized National Treasure Flory Jagoda. Then lead vocalist for the popular Toronto-based world music band Jaffa Road, Aviva had been raised Ashkenazi and the foreign, yet familiar cadences of Flory’s Balkan Ladino tradition immediately entranced her. The two eventually met when Aviva asked to study under the elder musician, and the deep friendship that emerged led Aviva down unexpected musical paths. Her new album La Serena (to be released Sept. 16, 2019) celebrates her teacher’s tradition by infusing it with new sounds and voices.

Aviva began taking a flight twice a year to Washington D.C. to study with Flory at her Alexandria home. She brought a tape recorder and would sit with her mentor for hours, listening to her reflections. “I wanted to know more and more about her stories, about being a survivor but also about life before,” recalls Aviva. “She taught me the songs, remembering a tradition that she had learned from her Nona, who had been killed during the war, along with the other forty-three members of her family.”

La Serena, Aviva’s first solo album since leaving Jaffa Road in 2016, is inspired by those conversations. Comprised of both traditional Sephardic songs and original compositions by Flory, the ten-track album was originally conceived of back in 2015 as a simple and intimate duet with guitarist and producer Joel Schwartz to reflect those intimate moments Aviva spent playing and singing together with her dear friend and teacher. However, as the songs were re-imagined, they ended up deciding to bring on Aviva’s other duet partner, Indian classical, jazz and world music bassist, composer, and producer Justin Gray on as well. Over the next few years, the trio worked together closely, arranging the entire album, balancing Aviva’s spacious vocals and added instrumental elements with restraint to maintain the intimacy and feeling of a duet where possible. Guests on the album also include Maryem and Ernie Tollar, both accomplished and well-known world music artists in Canada.

Aviva’s stylistic transmission of Flory’s songs likewise reflects the spirit of a duet rather than the direct passing down of songs from teacher to student, played strictly as taught. La Serena is instead an experiential choreography of two distinct voices and two disparate personal storylines converging at a point of friendship and, from there, manifesting something new.

For Aviva, the question is how to honor transmission of tradition but not to get locked up in it. “It is about a deep connection to Flory’s stories and being responsible to pass down a legacy. But I’m doing it in a way that maintains my own artistic voice. It's very different than how it was shared with me and, yet, still feels true.”

The most apparent defining feature of the album is Aviva’s open, pure vocal sound, arising from a training and aesthetic that desires to be unencumbered by any particular style. Other differentiating elements include the addition of the bass, which is not traditional to the genre yet brings a sense of grounding throughout the mix; also, the resonator guitar heard on “Arvoles Yoran”, which gives the project the hint of an Appalachian feel. It was important to Aviva to work with musicians who would come to the project with no expectation or premeditated notion about how the music is supposed to sound, artists outside the Jewish music-making community who would bring their own voices and tastes to the mix.

“You can’t hold on so tightly as to say ‘This is our thing. And it's this way and it can't be done this way’ because then it doesn't breathe. It has to get breathed into by Justin Gray and his aesthetic that he's brought through Indian classical music and Jazz, and by Joel Schwartz who has played in so many diverse settings and in so many styles, and by Maryem Tollar, who sings with me on ‘Laz Tiyas’ and is the only other singing voice on the album. It is moving when we sing together in Hebrew and Arabic….dissolves boundaries.”

In its live emanation, the project undergoes yet another metamorphosis, this time into a quartet, with the addition of master Persian percussionist Naghmeh Farahmand, whose distinct percussive technique involves hand-drumming a typical drum kit in combination with traditional percussion instruments (tour dates to be announced).

Yet, for all its instrumental and vocal divergences from tradition and simplicity, Aviva reflects that the album still sounds, at times, as it was intended – an intimate duet – with Schwartz's incredibly unique and elegant guitar playing being the most important other voice on the album. The textures running through the lead track “A ti Espanya” exemplify this conscious balance, as there is actually a fair bit of multi-vocal complexity added while retaining the feel of a duet.

“A ti Espanya” is Aviva’s interpretation of a Flory original that conveys the longing of Sephardic Jews for their homeland after being exiled from Spain in the 1400s. For Aviva, this song exemplifies an ache of yearning that is present in so many Ladino songs. It is an ache of longing, of exile from home, of loss of love that is shared not only between Sephardic Jews and their Ashkenazi cousins but also with an increasing number of different peoples around the world today.

“These stories need to be told in a way that can be heard by everyone and appreciated as great music, not in a way that just focuses on the oppression, but in a way that also celebrates the audacity of the human spirit and perseverance of joy that follows. There needs to be a way for the Jewish voice to be heard that is a celebration of not only what has come before but of what exists in this very moment. That blends the personal with the cultural legacy in such a way that makes it feel universal.”

Ultimately, La Serena is an album that represents creative growth and change as much as transmission of tradition. Artistically, Aviva is in the middle of a big transition after making the tough decision to leave the highly successful Jaffa Road after 15 years. Now she needs to move through the inherited voice, to honor her mentor before embarking on a new journey. This album is a part of that pathway and the doorway to her next moment of creation as it combines traditional Sephardic songs and originals by Flory with originals by Aviva herself.

“I am very deeply committed to honoring the legacy and what was given to me, and at the same time, devoted to freeing this particular human’s voice in this lifetime.”